Partnership for a Drug-Free New York

CANNABIS IS A DESTRUCTIVE DRUG

Drug Harms in the UK: A Multicriteria Decision Analysis
One of the greatest myths repeated about marijuana is that it is not a toxic drug, and, that it is “safer” than other drugs like alcohol or nicotine.

The truth is that numerous legitimate and scientific studies have proven otherwise.  But one study in particular clearly demonstrated three dynamics of marijuana use: that it is harmful across a spectrum of criteria, that it is as harmful and “toxic” as most other drugs, and that it is harmful to both self - and also to others.

A major study in Great Britain, published in the prestigious international medical journal Lancet in November of 2010, compared 20 different drugs against 16 categories of harm – either as harm to self or harm to society.

The study, Drug Harms in the UK: A Multicriteria Decision Analysis by Professors David J Nutt, FMedSci, Leslie A. King, PhD, and Lawrence D. Phillips, PhD. on behalf of the Independent Scientific Committee on Drugs, sought to demonstrate that the proper assessment of the harms caused by the misuse of drugs can inform policy makers in health, policing, and social care.  For the study, a multicriteria decision analysis (MCDA) model was applied to a range of drug harms in the UK.

● Cannabis was ranked 8th of the twenty drugs studied, for drug harm to Self and to Society.

● Additionally, the study found that cannabis was associated with some  15-of- the-16 criteria of harm.

A secondary finding from this study is that cannabis was found to be harmful not just to self - but also significantly so - to others.  This finding directly contradicts marijuana folklore that cannabis use does not interfere with the rights, health, or quality of life of others.

While the study acknowledged that several drugs were definitely more harmful than cannabis, it clearly demonstrated that cannabis is not a benign substance and is a substance that has negative results across the spectrum of criteria used for measuring harm – and that translates into a real reduction in the quality of life for self, family and society. 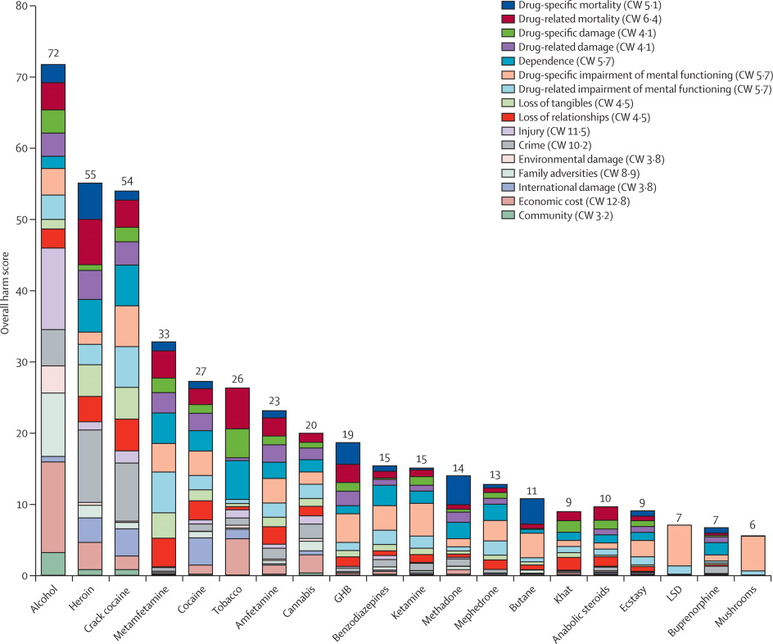